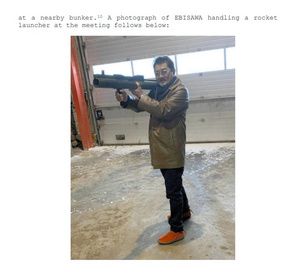 He intends to sell missiles to Myanmar Anti-government organization

in order to get heroin from them.

We can not know his detail. His detail is important.

person. But Answer is given.

I can show One case, how Yakuza Takes away the money from US Bank.

U.S. Attorney Announces Arrests Of A Yakuza Leader And Affiliates For International Trafficking Of Narcotics And Weapons, Including Surface-To-Air Missiles

Damian Williams, the United States Attorney for the Southern District of New York, and Anne Milgram, the Administrator of the U.S. Drug Enforcement Administration (“DEA”), announced today the arrests of TAKESHI EBISAWA, SOMPHOP SINGHASIRI, SUKSAN JULLANAN, a/k/a “Bobby,” and SOMPAK RUKRASARANEE, for international narcotics and weapons trafficking offenses. EBISAWA, a Japanese national, JULLANAN, a United States and Thai national, and RUKRASARANEE, a Thai national, were arrested in Manhattan on April 4, 2022. SINGHASIRI, a Thai national, was arrested in Manhattan on April 5, 2022. EBISAWA, JULLANAN, and RUKRASARANEE were presented before Magistrate Judge Jennifer Willis on April 5, 2022, and were ordered detained, and SINGHASIRI was presented before Judge Willis on April 6, 2022, and was ordered detained.

U.S. Attorney Damian Williams said: “We allege Mr. Ebisawa and his co-conspirators brokered deals with an undercover DEA agent to buy heavy-duty weaponry and sell large quantities of illegal drugs. The drugs were destined for New York streets, and the weapons shipments were meant for factions in unstable nations. Members of this international crime syndicate can no longer put lives in danger and will face justice for their illicit actions.”

DEA Administrator Anne Milgram said: “The expansive reach of transnational criminal networks, like the Yakuza, presents a serious threat to the safety and health of all communities. Ebisawa and his associates intended to distribute hundreds of kilograms of methamphetamine and heroin to the United States, using deadly weapons to enable their criminal activities, at a time when nearly 300 Americans lose their lives to drug overdose every day. These arrests represent the unwavering determination of the DEA, together with our U.S. and international partners, to target and bring to justice violent criminals who lead transnational drug trafficking organizations that continue to flood our country with dangerous drugs.”

According to the allegations contained in the Complaint charging the defendants, which was unsealed today in Manhattan federal court:[1]

EBISAWA, JULLANAN, and RUKRASARANEE conspired to broker the purchase from UC-1 of United States-made surface-to-air missiles (“SAMs”), as well as other heavy-duty weaponry, for multiple ethnic armed groups in Burma, and to accept large quantities of heroin and methamphetamine for distribution as partial payment for the weapons. EBISAWA, JULLANAN, and RUKRASARANEE understood the weapons to have been manufactured in the United States and taken from United States military bases in Afghanistan and planned for the narcotics to be distributed in the New York market.

In addition, EBISAWA and SINGHASIRI conspired to sell 500 kilograms of methamphetamine and 500 kilograms of heroin to UC-1 for distribution in New York. In furtherance of that transaction, on or about June 16, 2021, and on or about September 27, 2021, SINGHASIRI provided samples of approximately one kilogram of methamphetamine and approximately 1.4 kilograms of heroin. SINGHASIRI conspired to possess and use firearms, including machine guns, to protect narcotics shipments. EBISAWA also worked to launder $100,000 in purported narcotics proceeds from the United States to Japan.

A table containing the charges and maximum penalties for EBISAWA, 57, of Japan; SINGHASIRI, 58, of Thailand; JULLANAN, 53, of the United States and Thailand; and RUKRASARANEE, 55, of Thailand, is set forth below. The maximum potential sentences in this case are prescribed by Congress and are provided here for informational purposes only, as any sentencing of the defendants will be determined by a judge.

This prosecution is part of an Organized Crime Drug Enforcement Task Forces (OCDETF) operation. OCDETF identifies, disrupts, and dismantles the highest-level criminal organizations that threaten the United States using a prosecutor-led, intelligence-driven, multi-agency approach. Additional information about the OCDETF Program can be found at https://www.justice.gov/OCDETF.

The case is being handled by the Office’s National Security and International Narcotics Unit. Assistant United States Attorneys Kaylan E. Lasky and Alexander Li are in charge of the prosecution, with assistance from Trial Attorney Lauren B. Goddard of the Counterterrorism Section.

The charges contained in the Complaint are merely allegations, and the defendants are presumed innocent unless and until proven guilty.